For those relatively new to the hobby,  the ability to read frequency out to three or four decimal places is a given.  Digital readout is the norm and for many almost a necessity for normal day to day listening.  Obtaining a boat anchor receiver or one with an analog dial might bring what might be a daunting task.  For the relatively new ham used to digital readout,  things might be particularly daunting.
For many of us old timers,  the age of digital readout has been a real gift,  making easy what used to be a difficult thing,  knowing exactly where we are.  There were methods of doing that,  though they may be a little misty in memory. For today's SWL the ability to go to a specific frequency at a specific time might not be  considered a luxury.  Identifying a station now is a matter of going to a website and entering a frequency and being  told what stations are on the air at that moment and what language,  power, and beam heading they are using.  For those tuning the ham bands,  websites like DX-Summit can tell you what DX stations are on the air at that very moment and what frequency they are on,  allowing the astute listener to go to that frequency and camp out,  waiting for the prop to bring them home. ( of course for some for whom this has brought the closest thing to instant gratification the hobby can deliver,  if the station is not heard right away,  its on to something else or " the conditions are rotten I'll go watch television")
For those of us who grew up in the hobby without such luxuries,  or who are rediscovering the old radios and the fun they can be,  some of these techniques will need to be relearned or recalled.
For  most boat anchors,  there were two tuning dials which made at least tuning the ham bands a bit easier and provided a good way to know at least generally where we were.  For some,  even with an analog dial,  one could get a pretty good approximation within 5 khz or so of the frequency in use...sometimes even better.
The ham band only receivers had dials directly calibrated with the frequencies of the five or six major amateur bands available at the time.  The general coverage receivers had a main turning dial calibrated in general terms with a separate bandspread dial that gave a form of fine tuning with the dial face calibrated in the actual amateur bands. A small handful of radios --the National NC-190 for example--also offered calibrated band spread for the major shortwave broadcast bands as well. 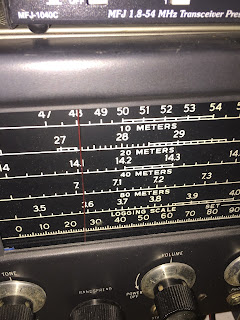 Hallicrafters SX-71 bandspread dial
In order for the calibration to be correct for the bandspread tuning,  it is necessary for the main tuning dial to be set at a proper starting point. There would be marks on the main tuning dial that were meant to be the proper starting point. One tunes the main dial to that point,  and then would tune the bandspread dial to explore the band.  Of course all of this relied on the accuracy of the main tuning dial calibration and the proper alignment of the radio. Even on a new from the factory receiver this might not be 100 percent accurate. This brings into play the need to find some sort of beacon or marking spot to make sure the main tuning control is properly set.  One way this can be done on some bands is to set the bandspread ahead of time to the frequency of a known station then carefully tune the main tuning until you hit that spot.  In the sixties,  this was really easy on forty meters at night because Radio Tirana Albania held down the 7300 khz spot with a gonzo signal.
A note here about forty meters.  In North and South America, forty meters is allocated for amateur use from 7000-7300 kHz.  In Europe and Asia,  hams only get 7000-7200 with the last 100 khz being allocated for broadcast use.  In the old days,  European and Asian hams only had 7000-7100 meaning that the upper portion of the band was loaded with high power broadcast stations that at night made the forty meter phone band and what was then the novice cw band in North America difficult at best and almost unusable at worst. In those days Novice licensees were limited to 75 watts INPUT ( usually resulting in 50 watts or less to the antenna) and were crystal controlled. Crystals in the early sixties cost at least $1.50 apiece,  an hour's pay for many at that time.  If it happened that a Novice had only two or three crystals and they happened to be one of the many frequencies occupied by the flame thrower Radio Moscow transmitters of they day,  it meant no operating at night.
The other way to set the main tuning properly as a starting place to insure proper bandspread calibration was to use what was known as a crystal calibrator.  This device which was available as standard equipment in some receivers or as an option in others,  put out a marker signal every 100 kHz. That meant that you could set the upper or lower band edge of the bandspread tuning on frequency,  then tune the main tuning until you hit the marker signal.  Then as you tuned up through the band, you could check the receiver tracking at every 100 khz point.  Some receivers did not track 100 percent accurately and you would correct the main tuning setting at the closest 100 khz point.  To make sure that the calibrator was properly set,  you would tune the receiver to one of the WWV frequencies and turn on the calibrator,  then adjusting a small trimmer adjustment to zero beat the calibrator against WWV.
For receivers that did not have a crystal calibrator or even the provision for one,  there were kits available for external crystal calibrators.  In fact,  today there are still those available for purchase on the internet through Amazon or EBay that are much simpler to use than in the old days. The output of the crystal calibrator is just loosely coupled to the input of the receiver then turned on when you need a calibration point.  Some calibrators also offer 25 khz markers,  giving more frequent calibration points. 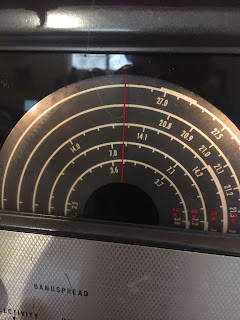 Hallicrafters SX-96 bandspread dial
The amount of bandspread available on these older receivers varied a bit from radio to radio and from band to band,  usually with wider bandspread and more frequent markings on the lower bands.  In the two examples shown,  the Hallicrafters SX-71 and SX-96 used in my shack,  the forty meter band has markings every 20 khz.  With the main tuning properly set, it is possible to easily determine and estimated frequency to within 5 khz or so.  The halfway point between dial markings is 10 khz and if you can eyeball well enough,  the quarter space determination can give you 5 and 15 khz readings.  If you get good,  you might be able to "eyeball interpolate" a little closer.
Without a crystal calibrator or handy broadcast station to provide a marker,  a very popular mode of operation on the bands gives a fairly good marker down in the cw portion of the bands. FT8 signals are very distinctive with the main FT8 frequency being around 75 khz up from the bottom of the band.  If you are not looking for frequency meter determination,  but just general logging estimations you can set the bandspread tuning to 7075 ( or 14075, 3575 etc) then tune  the distinctive FT8 beehive of signals in with the main tuning dial. It won't be super precise,  but will get you enough in the ballpark to know you are not looking outside the band for DX stations or not getting all the way to the bottom and miss some. ( I would NOT suggest using this method to determine if you are putting an analog dial transmitter on frequency!!!)
What does one do for the shortwave broadcast bands for which these radios generally do not have calibrated bandspread?  I will get to that at the same time I tell you about that category of radios that does not even have calibrated bandspread for the amateur bands.  Some receivers only have bandspread calibrated 0-100 or in some cases,  50-0-50 or something similar.  These are radios like the Hallicrafters S-38, S-120, and my S-118 or the National NC-60, NC-105, NC-121 or the Radio Shack DX-150 and 160.
Many of the radios that do have calibrated bandspread for the ham bands also have a 0-100 band spread for use on SWBC. 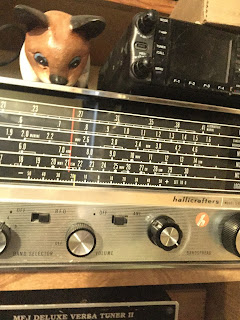 Hallicrafters S-118 dial
There can be no direct dial calibration with these radios, but there is a way to at least have a rough idea of where we are.  Through the use of the crystal calibrator one can find the band edges at least. There is also the method of using the FT8 signals as a marker to find the cw band.
If a crystal calibrator is available,  by tuning through two or three of the markers,  one can note how many dial calibration marks there are between the markers,  then determine that number of khz are denoted by those marks.  For example,  on forty meters, each mark on my S-118 dial amounts to 6 khz.
This may be done with the shortwave broadcast bands for the general coverage receivers that have calibrated bandspread for the hambands,  but not for SWBC.  It will not be as precise as digital readout but you can at least get a general idea where in the band you are.  You might not be able to go directly to some online list and identify a station you are hearing,  you might just have to use an old school method of identifying a station while using an old school radio...hear the ID or determine it from some other clue while listening.  And you might not be able to pinpoint some ham DX station you see on DX Summit or some other spotting network,  you might have to use the old school method...scanning the band and looking for it by listening through the crowd.  At least the spotting networks can still tell you that it is there to be sought!
Using these old radios may not be as easy as some of the new ones,  and certainly not like some of the SDR's,  but some might call it more sporting...and for some of us,  it brings back some of the thrill that a bit of uncertainty might bring.
Posted by DX Adventurer at 8:00 PM