Its pretty easy to get comfortable with the equipment one is using over time,  and often just as easy to wonder if there is something better than what you have,  something that will make it easier to find and hear the DX.

Then when you get the radio that seems to do it all,  slice and dice signals only 200 Hz apart, dig signals out of hip deep noise, read out  frequency to ten Hz,  let you spot a desired station on a data base or spotting network and allow you to tune right to it and just wait for the prop to put it in your lap,  why would you want to go back to something with almost none of those capabilities?

Over the past several years,  I have been very fortunate to have a series of excellent receivers, some of which can do all of the above.

In years past I had one of the premier receivers of the 1960's,  the Drake 2B.  For a time I had a Collins 75S-3.  In recent times up through today I have been using an Icom R-75 with dual 250 Hz Inrad filters and a Yaesu FT-950,  with a Yaesu FT-757-GX in reserve. I have had some boat anchors that I used for casual listening but one day when looking  back at logs from my very beginning time as a DX-er, I got to wondering if perhaps some of the DX I missed was due to the gear I had or just from my not knowing how to listen as well.

This triggered using a couple of the older receivers to listen during a couple ham contests and found I could hear some of the DX with them.  It only made sense,  I mean hams that had that gear when it was new certainly heard and worked DX without digital readout and DSP.

And that brought back thoughts of those early receivers and what I might have done with them today. That brought memories of pouring over the old Allied Radio catalogs that I started sending off for in 1957, and of staring at pictures of a trio of Knight Kit regenerative receivers: The Ocean Hopper, the Space Spanner and the SpanMaster.  I wanted one of them very badly at the time,  but it never came to be. As time went on,  I began my listening with my grandfathers's old Watterson 5-tube broadcast radio,  then a homebrew receiver and eventually with a National SW-54 and beginning my ham career with a National NC-88.

For some reason, my thoughts centered on the SpanMaster,  perhaps because a school  friend had one back  in the early 1960's when I already had my National. I wondered just what I might have heard with it, if there could have been DX with it.

Thus began a search for one, looking on E-Bay and other places.  Two friends assisted in the search and some months later my friend Drew found one. It arrived in fairly good shape,  but had a terrible AC hum and no stations were audible through it. Thus came the next step of ordering capacitors and replacing all of them,  not just the electrolytics,  but all of the paper caps. My friend John,  whose eyes are better and hands are steadier than mine in my old age, took care of the rehabbing and even replaced the old selenium rectifier with a solid state diode.

Soon it was ready to come to its new home. 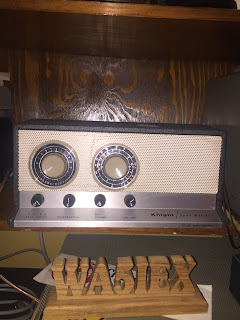 I had already been playing with the boat anchors a bit more, relearning some of the techniques for tuning for DX with broader selectivity, analog dials and listening for callsigns in a jumble.

February 1, 2021 at 0100 GMT I fired it up after making a place for it on the desk on a shelf above the FT-950. The antenna used was my home built 44 foot vertical over a radial field fed with RG8-X.  I had no idea how the calibration of the main tuning dial might be,  so I set the bandspread at full counterclockwise,  with the bandspread capacitor fully unmeshed and planned to hunt for a WWV signal and try to figure out where I was.

Tuning a regenerative receiver truly is an art.  As the noise came up in my headphones,  I inched the regen control up and heard the "plop" of oscillation starting and began tuning on Band "C", looking for the 5 mHz WWV.  I could not believe it! It popped right up, amazingly close to the 5 Mhz spot! Playing with the regen control and tuning carefully up the band,  Radio Rebelde from Cuba on 5025 came in very well.  Inching up the dial carefully,  its band mates also showed up: Radio Havana on 5040 and the rock and roll of WTWW on 5085.  This was going well so far.  There was a bit of time playing with the regen, finding the " sweet spot" for AM and the best selectivity.

A trip down to Band "A" and a tune through the broadcast band gave more practice in adjusting the regeneration and tuning.  XEG from Monterrey on 1050 was good and easily separated from WHO in DesMoines on 1040. Dial calibration was pretty close.  A quick spin down the dial over the next hour resulted in the "usual suspects" easily being logged: Radio Encyclopedia 530 from Cuba,  XEWA on 540 from San Luis Potosi,  XEX on 730, KTRH on 740, WSB on 750, WBAP on 820, WWL on 870,  XEW on 900, XEQ on 940, local KBBW on 1010 gave a little practice on dealing with a strong signal and a reminder of how they will "pull" a regen receiver and require more regen. The rest of the hour was spent playing with the dial and the knobs and relearning how to tune the regen.  Then it was enough for the night.

The next night it was time to try some CW on the ham bands.  Since it appeared that Band "C" was pretty close to on calibration,  I decided to try forty meters first. With the bandspread set all the way over,  I began tuning the main tuning down to the edge of the forty meter mark on the main dial and pretty close to it started running into ssb signals.  It was pretty near on! 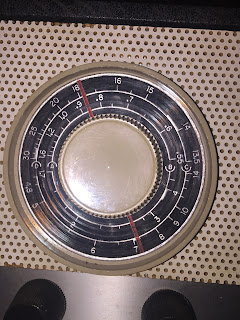 Tuning down past all the ssb signals with the bandspread,  I kept going until I ran into the characteristic FT8 signal cluster getting me down into the cw band. 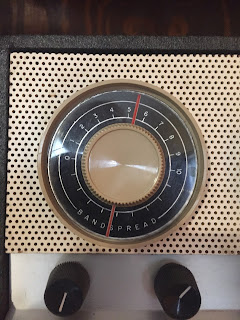 Tuning carefully further down,  I ran in to some CW signals and quickly identified my first two:N0ENV and W4AG.  It took a little fiddling around with tuning and the regeneration controls to find the sweet spot for cw, copying K4NAX and K4ZNC. Signals were a little drifty and tended to be a bit chirpy when strong as the receiver was pulled,  but copyable. But would there be any DX?

That question was answered just a few minutes later as I heard  stations working a fellow and just giving signal report and state and clearing.  It took a bit of fiddling with the fine regeneration control and very touchy tuning,  but soon identified HK5NLJ/3 from Colombia.  My first ham DX on the little two-tube regen.  In a few minutes that callsign was joined by XE2I and VA3SZ in the log. Before sleep overtook me,  I had a half page of callsigns written into the log.

The next few nights were spent polishing the tuning technique.  Many stateside stations were logged.  I was back in my childhood listening mode,  logging and writing down every station identified, regardless of DX or not.

The next milestone came February 5 with listening starting at 0030 GMT, a good start with VE3KZ first in the log on forty meters. Almost a full page of callsigns came next, but the real break came at 0213 when the first cross-the-ocean DX was logged with I1MMR.

We were on the way. The radio worked,  DX could be heard and I was advancing on the learning curve.We might just be ready for a real test in a couple of weekends when it would be time to try it out in a real DX contest.  But that's a story for another day!

Posted by DX Adventurer at 5:48 PM