I have mentioned that I use a paper log for initial logging. Its not that I am anti-technology, it is just what I am used to and it really does not slow me down. When logging amateurs, I often enter the callsigns directly into the log without use of scratch paper if the signal is strong and clear. If not, I have a half sheet of paper or folded sheet lying on top of a portion of the log page for use as scratch paper.


I am sure everyone has their preference for logging and I present mine not as any kind of inference that it is superior, just to share what I have been doing over the years. I am sure there are much better ways to get the job done.


I use regular school notebooks for logs, usually the spiral bound ones. I leave a little margin on the left for special notations, then make columns for times in GMT, the station callsign or identifier, frequency, mode if not obvious, signal report ( I still use the old RST system...it's one I know and am familiar with and provides me the info I need for comparison later) and the location. I take a full line for entering the date, always putting it at the top of the page if starting over or if carrying over from another page. I usually put the receiver I am using and antenna at the top left of the first page when I change rigs. It is decidedly low tech, but it is inexpensive and convenient. I can always transfer the entries into the computer logging program later. Its not a chore for me and its like reliving the DX experience.


I use the computer logging program for amateur logings mostly, having not found a log appropriate for how I like a log to look for broadcast and utility stations. The SWL logging programs seem to have way too much information to enter. I am interested in a straight, one line logging of the format that I use in the notebooks, but that would allow me to keep track of countries overall and countries for each band. If someone has a suggestion for one that would do that, I would be very happy. Attempts at adapting amateur programs have not worked well.


Below are some samples of my paper logging over the years. The first was probably not technically a log in the purest sense of the word. In my beginning days of broadcast band DX-ing, I just kept lists of stations heard. This was back in my pre teen years, beginning in 1958. I had the lists just segregated into US and foreign stations. the receiver used was a Watterson 5 tube table radio with 70 foot longwire up 20 feet. A sample of that is shown below: 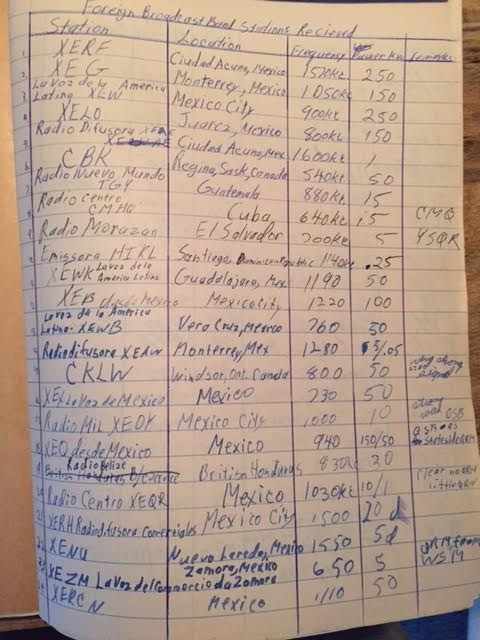 When I began to listen to shortwave in late 1959 and 1960, the simple listing continued. Again there was no record keeping of time and date, just lists of the stations received. During this period I was using a home brew receiver for listening. Note the use of call letters a lot more in those days, particularly for the Voice of American transmitter Sites! 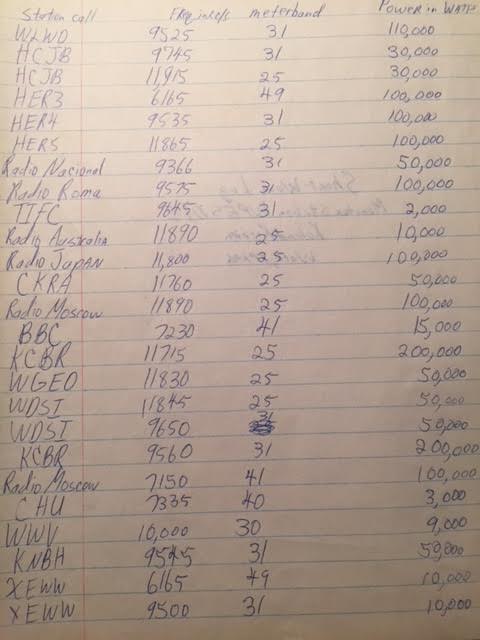 Later I began using the ARRL logbooks to enter my received stations, and began including date and time information. It was in this period that I used a National SW-54 and later a National NC-88 for listening. Thus followed the pattern for several years. When I landed in East Africa in 1972-73 , I used a Radio Shack log for keeping track of stations heard in Asmara, Ethiopia using a Hallicrafters SX-99 Receiver and a 125 foot longwire fifteen feet above the roof of a three story barracks building.. 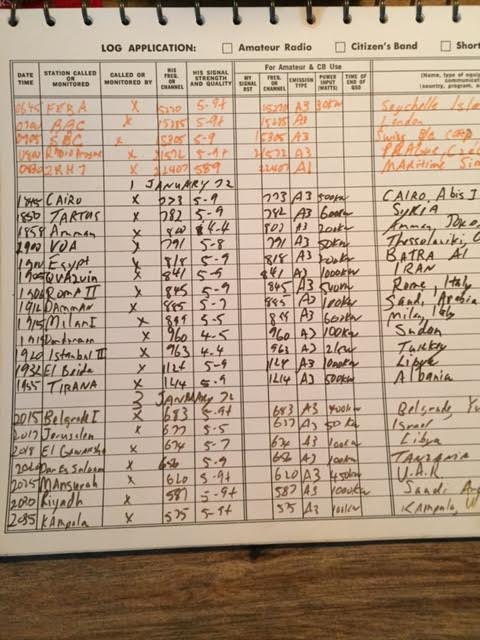 When I got back to the US and found myself at Ft Polk, Louisiana DX-ing in the barracks with a National NC-190 and 125 foot longwire strung between two barracks buildings up about 25 feet.  I was back to using the ARRL logbooks 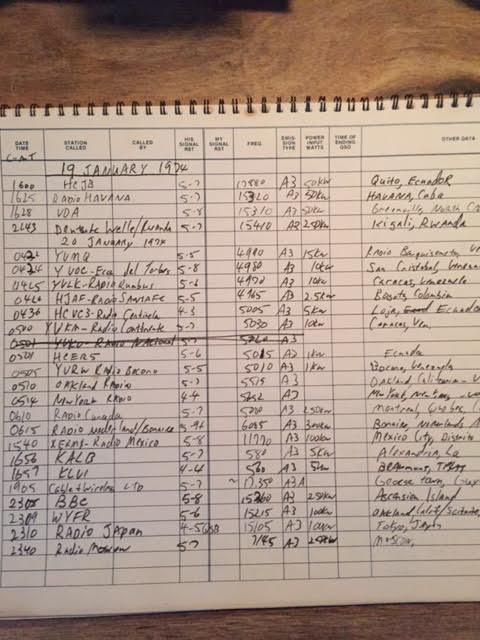 Later in the civilian world I began using spiral notebooks. At one point, I kept a separate log for utility stations, using a different kind of spiral notebook bound at the top. Note use of the Drake 2B with crystals in the auxiliary bandswitch positions for bands outside the amateur frequencies during this session and a listing of which antenna was used in the far right column.  The Windom antenna used was 135 feet long up 40 feet. I used a Heathkit roller coil amateur tuner to match the antenna on all bands. I still have that receiver today and it is excellent for all kinds of DX work between 3.5 and 30 MHz. 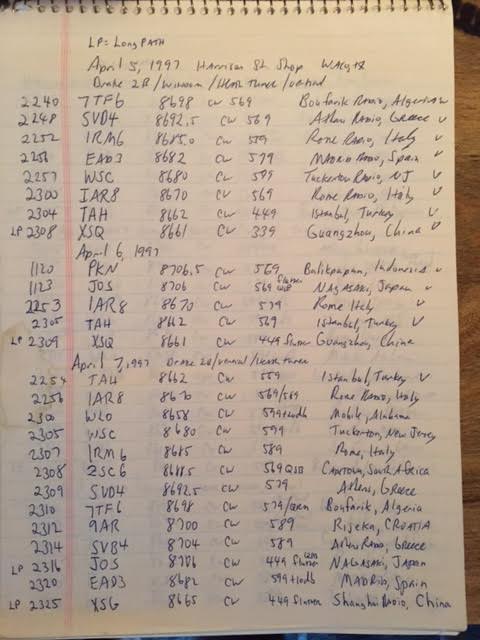 Now I continue to use the spiral bound books for initial paper logging for all forms of DX-ing, including the medium wave. Note the R-75 was used for this session with the 90 foot long sloper antenna at 45 feet. 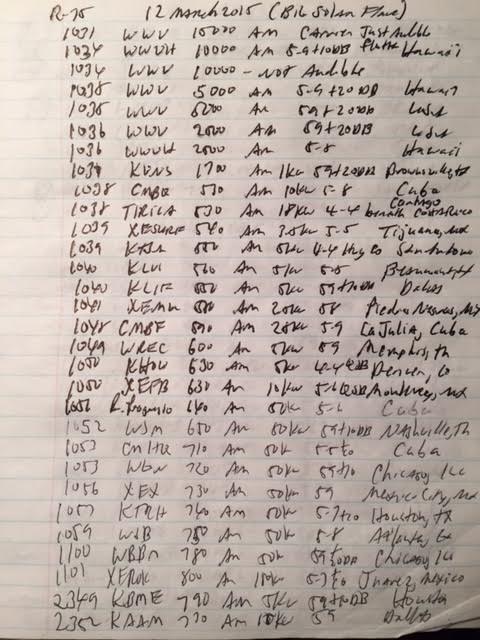 The same works well for logging shortwave broadcasts. Again in this session the R-75 and sloper were used. 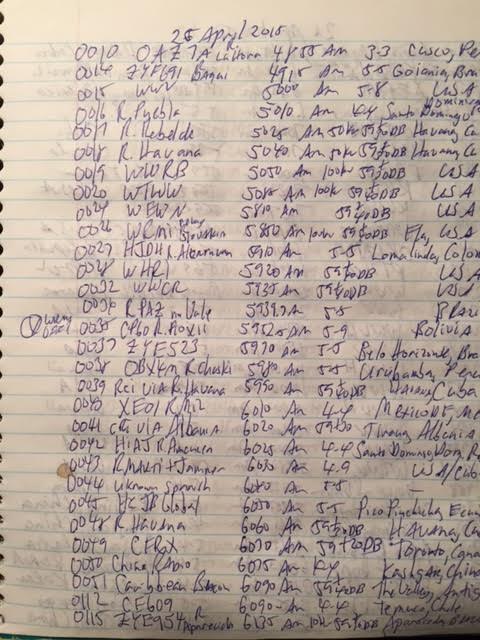 And it also  works well for me for amateur band DX. For this session the FT-757-GX was used with the sloper. Note the X's in the far left column to draw attention to some "good stuff" 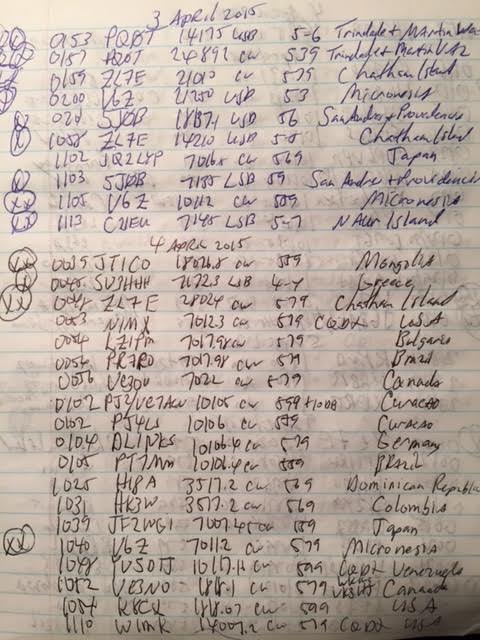 Posted by DX Adventurer at 6:46 PM