I have mentioned the use of loops in the past under the heading " Loop the Loop".  This past week in one of my Facebook Groups there was a question about Low Frequency Reception and the use of loops.  I posted a picture of a loop my father and I built and since there was considerable interest in the group I thought I would put the information here.
This loop was build back in 1990 and has seen considerable use.  It is a box loop or some would call a solenoid loop that is three feet across and tuned with a three gang variable capacitor. It tunes form roughly 180 to 1500 kHz.  By tapping the coil and selecting one, two or three gangs of the capacitor, the tuning range can be varied.
A tuned loop is actually a very simple device,  with the difficulties being not in the electrical design but in the mechanics.  This loop was made of wood and designed to be rotated in azimuth and tilted in elevation.
To keep the loop from tilting over,  my father who worked with me on the project,  made the base from a salvaged solid core door.  Now it must be mentioned that this loop is not small and is not light.  The base must be heavy to make sure the loop is stable and will not fall over or try to move when its turned or tilted.
The basic idea of any tuned loop is that it consists of a parallel tuned circuit.  The loop is actually the coil part of an L-C circuit. It resonates at the frequency for which it is being used.  A variable capacitor connected across the winding takes care of that chore. The one thing that is important if deep and clean nulls are to be obtained is that all connections should be very short.  For that reason, we chose to mount the variable capacitor right in the center of the loop itself. This is not a remotely tuned device ( one must  often chose between convenience and performance!!) It should be noted that no other connection is made to this parallel tuned circuit.  It stands completely alone.
﻿       The connection to the receiver is made through a two turn link wound a couple inches away from the main winding and connected to a short piece of coaxial cable that then runs to the receiver.﻿﻿      A simple loop could be made simply by winding wire around a cardboard box or a plastic trash can and connecting the capacitor across the main winding and the link winding to the receiver.  I have used similar arrangements many times,  but this project came about with a desire to have something permanent and nice looking.        This view shows the mounting of the variable capacitor in the center of the loop. An alligator clip allows connection to one, two or three gangs of the capacitor as needed to change the tuning range. 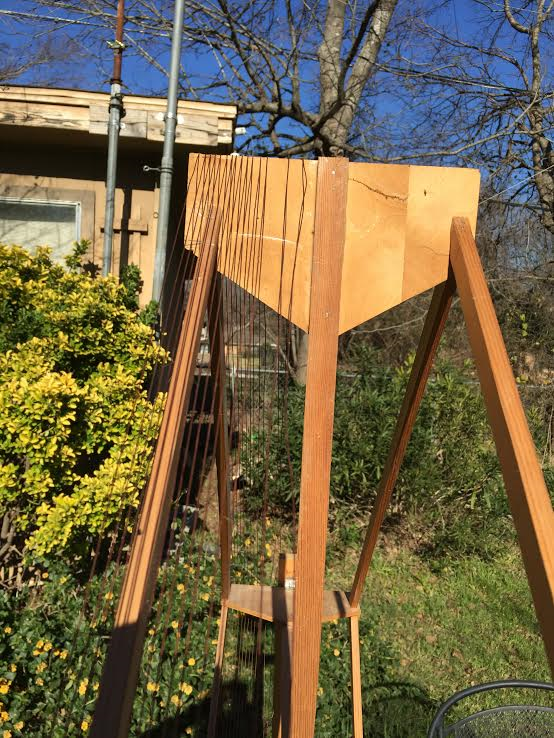 This view shows the windings...In this case there are thirteen turns on the loop.  They are spaced about a quarter inch apart.  The two turn link is to the right. 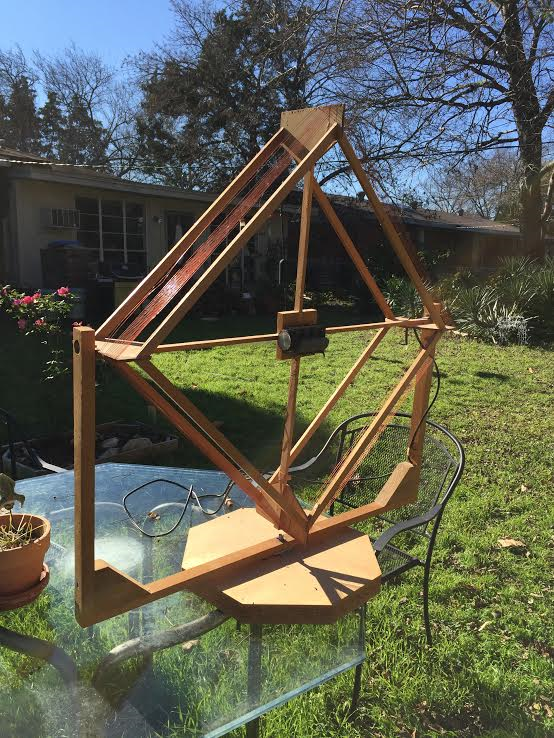 Another view of the loop in my back yard looking toward the house and showing the tuning capacitor. 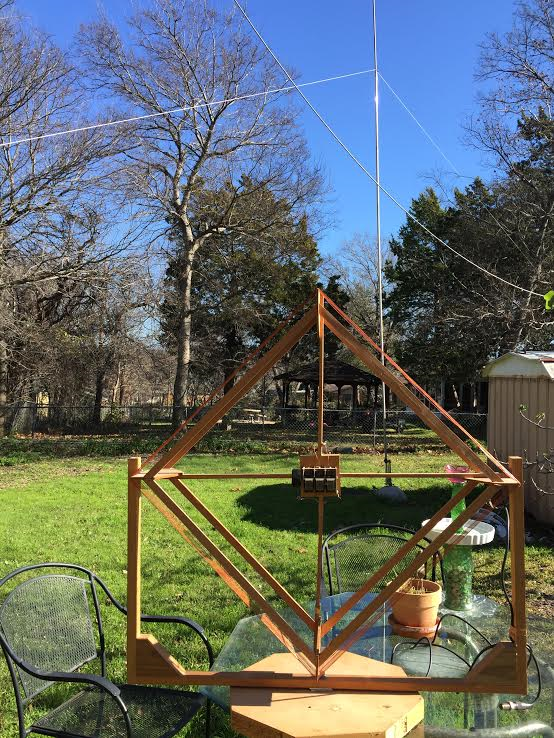 Another view of the loop with my forty foot vertical in the background.  This loop is a little large for permanent use in the house at my location, so I generally use it when operating out in the yard at this table or portable at other locations.  I have used it with a Radio Shack DX-440, My Icom R-75, Hallicrafters SX-96 and my MacKay low frequency radio.  I do not seem to need a preamp with it.  I have used it portable at Galveston and at various locations in the Texas Hill Country, usually just trying to find an electrically quiet spot. It has brought in NDB's from all over the United States and Canada, several from Cuba,  ZBB from Bimini, many from Mexico and Central America and even some from South America,  best NDB DX being from Ecuador.  I have also received broadcast stations from Europe and Morocco while visiting at Galveston.  I have found that the ability to null interfering stations to allow many stations otherwise unloggable being captured. It also helps in nulling noise. The lobes are much broader than the nulls, which are very sharp and deep,  I can totally eliminate local broadcast stations with it. Tilting the loop in the elevation plane can also allow reception of stations at different distances in the same azimuth direction. Tuning of the loop is very sharp, especially on the lower frequencies.
Posted by DX Adventurer at 3:33 PM